Gazzda – Made in Bosnia & Herzegovina Hope. It’s always there. And, as the world adjusts to the horrors of Ukraine, maybe one inspiring story of recovery after a different, but equally brutal, conflict can remind us of that. It tells the tale of a child refugee who went home as an adult and turned a dream into reality. In exile, he made a lifelong friend. Together they founded a top-end design and manufacturing company called Gazzda – all made in Bosnia and Herzegovina.

Making high-end furniture is a far cry from the war Zlatko Tanovic left behind all those years ago. But it proves even the ashes of one of the dirtiest and ugliest conflicts of recent European history can contain the seeds of something valuable, beautiful and worthwhile.

Before exploring Gazzda’s background, however, it is worth exploring the country where it all began. For most people, Sarajevo conjures up those memories of the 1990s and its central spot in the war after the former Yugoslavia shattered into its constituent parts. At that time, it was a place associated with unrelenting gloom. That is only part of the story of the country. There is also startling beauty in all directions, you just need the peace to find it. In the north, you have the Una river valley cutting its way through spectacular landscapes; in the south, the breathtaking Kravice Waterfalls. The central mountain ranges mean you are never short of landscapes to inspire.

It is also a cultural crossroads. To the west and north are the influences from European centres, such as Austria and Italy. To the east, the Slavic ways of life from Serbia, Bulgaria and lands further afield. Mediterranean heritage bubbles up from Greece to the south. It was also part of the Ottoman Empire until late in the 19th century, so Turkish culture was part of everyday life for over 500 years.

It is truly an artistic melting pot. Add a tradition of craftsmanship, and it is easy to see why Gazzda sees its homeland as its inspiration. It describes its mission as turning nature’s gifts into people’s treasures. Personalities Behind the Brand

That friendship forged in hardship underpins the Gazzda experience. Zlatko Tanovic was one of thousands forced to flee Sarajevo with his mother during the war. He settled in Amsterdam, truly a stranger in a strange land. It was there that he met Kenny van Halderen and their lifelong friendship blossomed.

They went their different ways after school and university, but it did not take long for them to get back together, working for a Bosnian furniture firm. That was the start for Zlatko Tanovic and Kenny van Halderen but, even then, they had plans to go their own way. Joining up with designer Salih Teskeredzic provided the opportunity.

“The beautiful stuff was unnecessarily expensive,” Zlatko Tanovic explained. “The affordable stuff looked uninspired. With all the talented designers I got to know right here in Sarajevo, including Salih, I knew it could be done differently. All we had to do was start from scratch, and use our imaginations.” Now, it is Kenny van Halderen who has moved after leaving Holland to settle in Sarajevo. Their shared experience of exile has become strength, though. They understand the importance of a home and are determined to bring that special emotion to all their customers. The aim is to make sure every item Gazzda makes in Bosnia and Herzegovina will become a treasured possession. Already it is a recognised UK luxury furniture brand.

“Since home is such a special and important place, Gazzda loves to create extraordinary furniture for it. We help people build a home they can be proud of; that makes them smile just by thinking about it, that generates a fuzzy feeling when they talk about it, that refreshes them when they rest in it. We help create a place where people can flourish, snooze, and simply come home,” they say on the company website.

“It is important to us that every idea we bring to life has the potential to become dear to a person. We are therefore mindful about the smallest details when creating a new furniture element: is it practical? Refreshing? Smartly constructed?

“Does it have a clear identity of its own? Feeling any butterflies? Fireworks? When we have a resounding ‘yes’ to all these questions, we get to work and make sure that our products are being made as efficiently and environmentally friendly as possible.” For Gazzda, made in Bosnia and Herzegovina means being environmentally friendly is essential. It had the chance to start from a clean slate and its founders are determined to use it.

Gazzda’s emphasis is firmly on looking after the natural world. The primary construction material for the furniture is white oak, all from sustainable forests. The forest managers plant a new tree to replace every one felled to be part of a Gazzda chair or table. In 100 years, they can go back to the same part of the same forest and start the process all over again.

Oak has a lot of advantages for furniture. It is one of the best hardwoods around for shaping individual elements. With its attractive patterning, it also looks amazing. On top of all that, oak is renewable, biodegradable, and antibacterial. It is one of the best woods for regulating its moisture content, which gives it long-lasting stability.

The natural theme continues in the softer parts of the furniture, where cotton and wool feature extensively. Like wood, they are sustainable and biodegradable. That all means that if any item reaches the end of its useful life, it won’t clog up landfill sites. Salih Teskeredzic is the main brain behind the design element and is a true visionary. He is determined to show Bosnia and Herzegovina is capable of becoming a manufacturing hub. He is also determined to show that good, clean design is the way forward.

The Scandinavian influences are obvious. Pure lines and clever angles are the key features holding all the styles together. It also earned him his position as a professor at the Academy of Fine Arts in Sarajevo. He has produced a range of work that has won many prizes, including the prestigious Red Dot award.

Just to get a feel of the original work that Gazzda makes in Bosnia and Herzegovina, it is worth having a look at a few of their iconic design ranges. These could feature anywhere in the home. They go all the way from purely ornamental to the more functional, with tables, chairs, storage units and even bedroom furniture.

This is the chair for you if you are looking for handcrafted quality. There are plenty of points of difference, but we can see a good example of the work that goes into making it special in the backrest and the way it connects to the rest of the frame.

It looks like a single slice of wood. That’s because the craftworkers who make it are so good at making sure the layers blend seamlessly and blend with the armrests. Add hours of polishing, and it gains its light, fluid touch. The seat almost seems to float on the frame, adding to the airy feeling. The covering can be natural fabric or leather and the result looks stunning. As with many of the Gazzda products, the beds share an airy design that gives the room an uncluttered feel. Whether the legs are powder-coated steel in the Fina range or the solid wood of the Fawn range, they still give the structure that all-important lightweight minimalist look. Though it is not obvious, the attention to detail is also there in the mattress support and the integrated headboard. 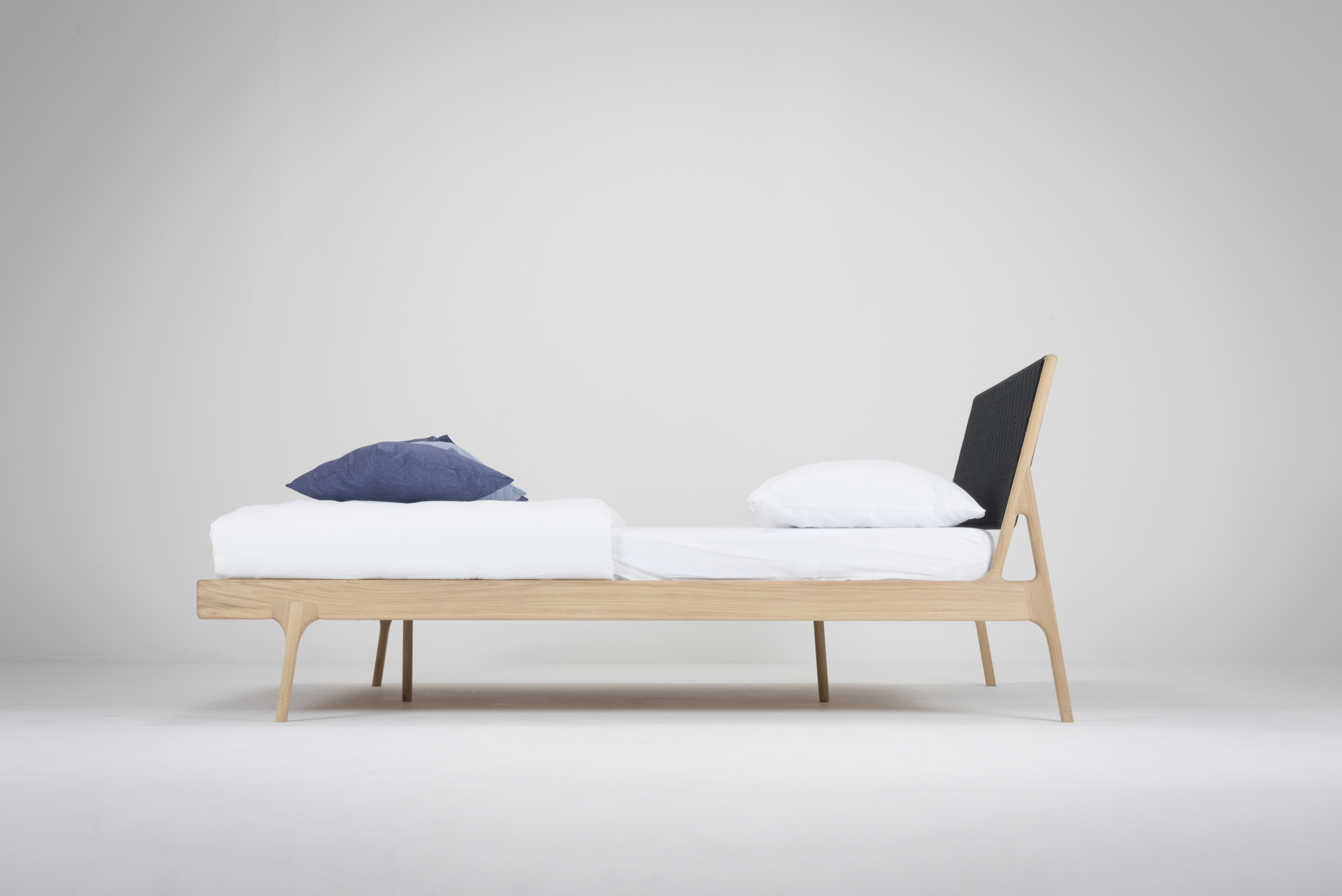 Again, Gazzda makes tables as part of several furniture ranges. For example, take the Koza, and its iconic triangular structures; the sleek but strong Stafa; the Tink version, which looks a bit like an upside-down butterfly; or the smooth curves of the Fawn.

They all share the same attention to detail and the same clean lines. That does not restrict the designs in any way. The Koza, for example, gets around the local custom that it is bad luck to sit at a corner with a curved design that rules out unlucky spots. The Stafa is more conventional with a swept-down edge and angled legs. Some use powder-coated steel for extra strength, others just rely on the quality and skill of the woodworkers to achieve the same thing.

They all combine perfectly with the Gazzda chair ranges such as the Muna, Fawn, Tink, Nora or Stafa — to suggest just a few.

Gazzda likes to talk about ‘creating an awesome sense of home’. They describe that as producing the furniture that makes the home feel special. The core features of its products are that they have to be light, smooth, and natural.

It shows the ingenuity of their designers that they can achieve that with a material as heavy and strong as oak. People often associate it with rigid solidity, but the Gazzda woodworkers making it in Bosnia and Herzegovina using their trademark minimalist designs, it looks almost weightless.

There is no corresponding magic to the smooth finish. That is the product of hard work because the company takes the time to shape and polish every curve, every surface. They also use white oiled oak. The result is a surface that begs to be touched.

Finally, remember it looks and feels natural. Some products have a little powder-coated steel, but mother nature is the inspiration for all of them. That sense of bringing nature into the home contributes to a sense of wellbeing. Add the message of hope from finding that level of quality from a place so recently a war zone and Gazzda has become the ultimate good news story.